BigBelly Solar has redefined how we throw away trash by developing one of the coolest trash bins you will ever see.

If you’ve spent a day in the big city lately, you may have noticed a big change in the type of trash receptacles located around town. BigBelly Solar has redefined how we throw away trash by developing one of the coolest trash bins you will ever see. In 2003, BigBelly Solar jumped on the scene with its goal of transforming the way cities think about waste collection. The company wanted to offer a solution for the public space by leveraging renewable solar energy and information technology. With these goals in mind, the solar-powered trash can emerged.

The trash cans use off-grid solar power to support the low-power sensors that compact trash when the bin is full. This compacting process allows the cans to hold up to five times more trash than a conventional can. When the cans are truly full to capacity, they “call out” to the city via wireless communication to let city employees know that they are ready to be picked up. This process results in fewer trips from city employees to empty trash bins and also saves money in fuel for the city. 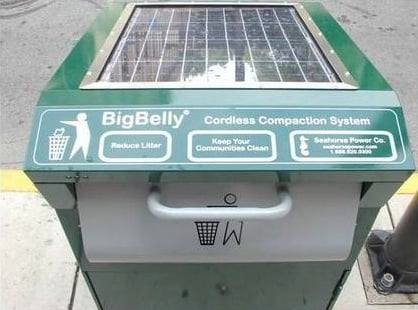 Since its start in 2003, BigBelly has grown to see its product in every state and more than 30 countries worldwide. Major metropolitan cities like Philadelphia, New York City, and Raleigh use the BigBelly systems and have seen the savings that they provide firsthand. Raleigh, for example, implemented the solar cans in 2009 as part of its Sustainable Raleigh initiative. Jen Baker, one of the city’s senior sustainability technicians, claims that trash pick-ups were happening twice a day, seven days a week, but after the BigBelly systems were implemented, the number of pick-ups dropped to once a month! In bigger cities like Philadelphia, the BigBelly systems have saved the city over $900,000 each year since implementing the cans.

There is no doubt that BigBelly is making a difference in the way that cities think about sustainability and energy use. While the cans are a relatively new technology, they make a big difference once they are implemented. Although the cost is high ($4,400 each), the return on investment is absolutely worth it. The systems cause the city to spend less money and waste less energy through pick-ups. Don’t be surprised if you happen to see one of these cans pop up in a city near you!

Bottled Water: Reasons Why It’s Inefficient & What You Can Do

Check out this cool blog!
Read more...
Blog Blog Back to Blog