Can white paint atop a roof reflect the sun's rays and conserve energy? Recent studies are looking into this hypothesis and finding that specialized paint will soon have this ability.

Silicon Ink, as it is called, can be 18 percent more efficient. According to Power and Energy Magazine, Innovalight Inc. is working with JA Solar Holdings Limited to commercialize this next-generation ink. Ultimately, off-the-shelf industrial printers will be able to print the ink solution onto any surface.

Researchers at the New Jersey Institute of Technology first conceptualized this product back in 2007 when they claimed to have developed a solar cell which could be painted on flexible plastic sheets.

The goal is for homeowners to be able to print sheets of the solar cells from their inkjet printers and put the finished Silicon Ink product on a wall or roof of their home. This commercialized concept will be widespread and popular, as it will allow common people to create their own power stations in their homes.

The product is still in its early stages, but when it is available, conservationists should be ready to take their ideas about solar efficiency to the next level.

It’s not only cool that this product was conceived almost 10 years ago but that it will also put power, literally, into homeowners’ hands.

Power and Energy Magazine indicates that the European Commission is already kicking its plan for solar efficiency up a notch by putting forth 50 billion euros toward research and development. The plan should reduce carbon emissions, as illustrated below. 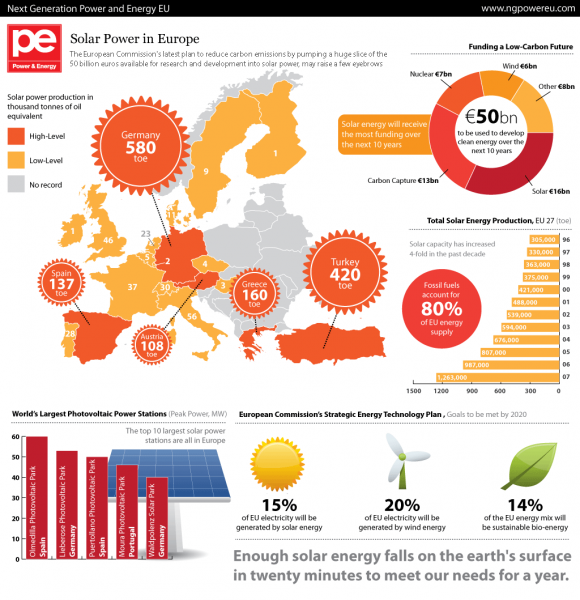 Solar power is the next big thing, and it doesn’t just have to be for electricians and roofers. Since renewable energy will affect us all, we should all become educated on at least the basics of solar energy.

One reply on “Silicon Ink, a 3D Printed Solar Cell, Can Conserve Energy”

For the most up-to-date schedule of NABCEP certification exams, please visit the NABCEP Calendar.

Solar Ready Vets Training to be Offered by Everblue