A Breakdown of How Solar Energy Works

Studies have shown that among all the clean energy occupations out there, jobs relating to solar and renewable energy have shown the steadiest incline. In the last 10 years, solar photovoltaic (PV) jobs have remained in the top 15 sectors of green jobs growth. This is why it’s so important to be aware of solar energy basics. 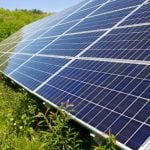 With so many positive statistics being thrown around, individuals wanting to participate in the green movement have looked to solar as their chance for success. But what is solar energy? I’m willing to bet most people would throw out a vague answer that goes something like this, “Solar energy comes from the sun. The sun gives us endless, or renewable, energy, and this helps us to lower our dependence on fossil fuels. We want to lower our dependence on fossil fuels because they are harmful to our environment.”

While that is a correct evaluation of solar energy and its purpose, many individuals still haven’t grasped how exactly the sun creates energy. They know they want to install solar panels, but they don’t particularly know what the solar panels do or how they work.

Before deciding that you want to become a solar panel installer, you should do some research about solar energy so you understand why certain tasks are necessary. Such basics are covered in Everblue’s Solar PV Associate training. In the meantime, let’s go over the basics of solar energy and define some of these terms, so you can make informed decisions concerning your future career.

Photons – tiny particles of light that come from the sun

Silicon – a chemical element with semiconducting properties. Silicon is one of the most common elements on Earth.

Semiconductor – a material with electrical conductivity due to electron flow

Conductivity – the transfer of heat or electricity through a substance

Electron – a stable subatomic particle with a charge of negative electricity, found in all atoms and acting as the primary carrier of electricity in solids

Proton – a stable subatomic particle occurring in all atomic nuclei, with a positive electric charge equal in magnitude to that of an electron, but of opposite sign

Electricity – energy made available by the flow of electric charge through a conductor.

Every minute, enough photons reach the Earth to power our energy needs for a whole year. It starts when photons hit photovoltaic panels that have been installed on a house. Each solar cell that makes up the panel has a positive and negative layer to it. An electric current is created when photons hit the cell and become absorbed. This energy causes the electrons to come free. The electrons flow out of the solar cell and move through a wire (conductor) connected to the house, thereby creating electricity. By combining solar cells and photovoltaic panels, we can produce enough electricity to power a house.

Though it may seem like climate change legislation has slowed down, there are still hundreds of solar incentive programs available across the country.
Read more...

An overview of federal and local government programs that are helping to grow the solar energy industry.
Read more...
Blog Blog Back to Blog