Skip to content
Home Uncategorized Save Water by Conserving Energy: The Two Are Connected

Save Water by Conserving Energy: The Two Are Connected

You can save water by conserving energy. Or is it the other way around? Actually, it’s both.

Water and energy are so closely connected that you can’t have one without the other. Water is required to produce energy, and it takes energy to extract, distribute, and treat the fresh water that is essential for all life. After water is used, more energy is spent in the collection and treatment of wastewater. Water is such a scarce, valuable commodity that it is often referred to as “the new oil” and therefore, we need to save water. A brief look at water’s connection with energy, the environment, and our daily lives, and you’ll start to see just how relevant the comparison to oil is.

In most power plants, water is essential for the cooling systems, to cool the steam that spins the electricity, generating turbines.

Not just water, but cool water is of great importance in power plants, which is where climate change factors in. Although there are several different cooling technologies, most U.S. nuclear power reactors use once-through cooling. With this method, water is drawn from surface or ground water sources, and a fraction of that water is consumed by the power plant and lost through evaporation. The remaining water is returned to the water source. During droughts and heat waves, water may be too warm to cool the plant and too warm to be safely discharged, causing concern for local ecosystems.

In 2010 and 2011, the Browns Ferry plant in Athens, AL had to curtail power production when summer heat waves raised Tennessee River water temperatures to over 90 degrees. Without enough adequately cool water to properly operate the cooling system, the power plant became inoperable in the midst of peak summer air conditioning demand.

Renewable Energy, Water, and the Market

As we move toward more renewable energy in the battle against climate change and the energy crisis, access to water resources is a determining factor in what technologies will win long-term favor in the market. 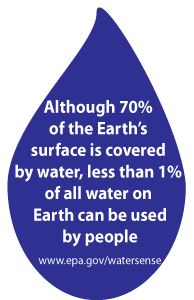 Water scarcity threatens to hamper the deployment of geothermal, solar thermal, and hydroelectricity, which are all highly dependent on the availability of water. Corn-based ethanol fuels are not immune to water challenges, since high amounts of water are required for growing the crops. Wind and solar technologies have the best chances to succeed in the water game, because they require little or no water beyond the manufacturing process to operate efficiently.

Fracking, the controversial method of extracting natural gas that the U.S., has become heavily relied upon as an alternative to coal, which is also threatened by water shortages. The process of fracking involves the high-pressure injection of a combination of water, sand, and chemicals deep below the earth’s surface to create small cracks from where gas can be extracted. In Pennsylvania, where fracking is concentrated in several areas, the water issue is one of quality, while concerns surface over contamination of ground water supplies. In Texas’s arid climate, water quantity is a challenge, where shortages and limited access to water make natural gas exploration more difficult and costly. 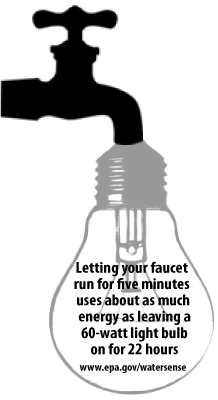 Capturing and reusing storm water runoff reduces the consumption of freshwater, as well as the energy usage and carbon dioxide emissions associated with importing water. Captured storm water can be used onsite for landscape irrigation or graywater uses like flushing toilets. Strategically placed native plants, rain barrels, green roofs, and pervious paved surfaces retain water on site to help rainfall soak into the ground, rather than flowing to, and polluting, nearby bodies of water. Green building goes beyond water-saving methods to advocate for other energy/water-connected conservation such as materials reuse, transportation-reducing site selection, waste management, and overall energy efficiency.

Clean, safe, fresh water is our most precious commodity, likely winning out over oil in demand, scarcity, and necessity. While the energy-water cycle may be enough to make your head spin, it’s also a sobering reminder that there is no such thing as an insignificant impact from human activity. There are certainly conscious acts that we can do to save water.

Why Green Jobs Are Recession-Proof