According to the Residential Energy Services Network (RESNET), there were 206,583 homes in the United States that were evaluated by a HERS Rater and issued a HERS Score in 2016.

This broke the record for the number of homes HERS rated in a year!

For a better understanding of HERS Scores, visit our RESNET HERS Explained page. 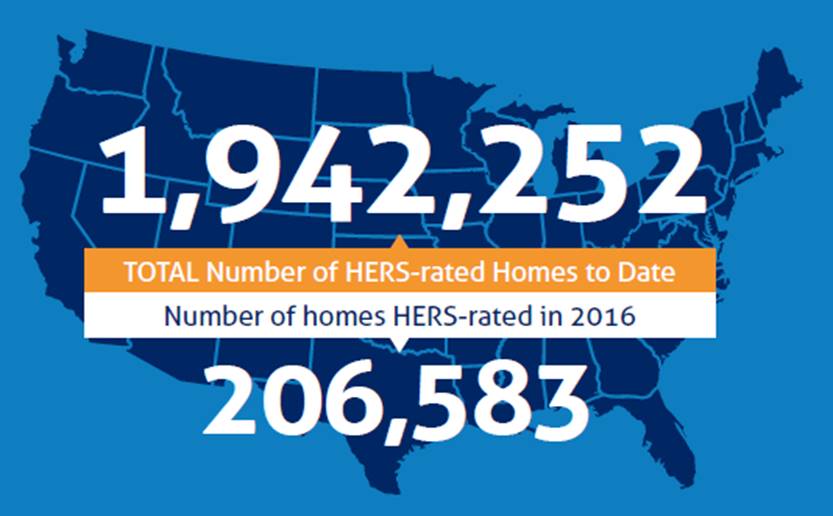 In addition, the average HERS Score in 2016 was 61, while the average in 2015 was 62. Though this may not seem like a huge improvement year to year, RESNET’s Executive Director, Steve Baden, highlighted this impact when compared to the majority of the housing stock.

By far, the state with the most number of HERS-rated homes in 2016 was Texas.

As it turns out, Texas is one of the nine states that has adopted the 2015 IECC code for residential buildings. Within the energy efficiency section of the 2015 IECC, there is an option for homebuilders to meet code requirements using a home energy rating index, such as RESNET’s Home Energy Rating System (HERS) Index.

Among the six states with the most number of HERS-rated homes, two states have adopted the 2015 IECC. I’m not sure which of the following is more impressive – states that basically require HERS ratings or states with no mandatory code that push themselves toward more energy-efficient homes.

The six leading states in terms of homes receiving a HERS score were:

Where to Find Energy-Efficient Housing

The six states with the lowest average HERS scores are equally mixed with their adoption of 2015 IECC code, which goes to show that energy-efficient housing goes beyond building code requirements.

As a reminder, the lower the HERS score (out of 100), the more energy-efficient the home is.

The six states with the lowest average HERS scores were:

It appears from these numbers that perhaps the best places to buy an energy-efficient house or to find work as a HERS Rater are in the Midwestern states. Of course as all the states adopt more stringent energy codes, we can expect to see improvements across the country. Efforts are already underway for the 2018 IECC, which is expected to uphold the home energy rating index compliance path. We look forward to seeing how states will respond and to see more updates from the RESNET organization in 2017 and beyond.

To begin your efforts in the home energy auditing field, register for one of our RESNET HERS Rater Training sessions or call us at (800) 460-2575 to discuss your career goals.

RESNET will be utilizing different technology to host its CAZ Simulation and the Practical Simulation exams.
Read more...
Blog Blog Back to Blog