Last week, the New York City Council passed two laws – 701-A and 721-A – that amend the city’s current legislation about LEED Certification. These NYC LEED requirement laws now state that most new city buildings and major retrofits must achieve LEED Gold. This is an enhancement from previous legislation that required a minimum LEED Certified rating level for health and educational occupancies and a minimum LEED Silver rating level for buildings or spaces of all other covered occupancies.

If you’re just getting started with LEED, visit our New to LEED? Start Here! introduction. 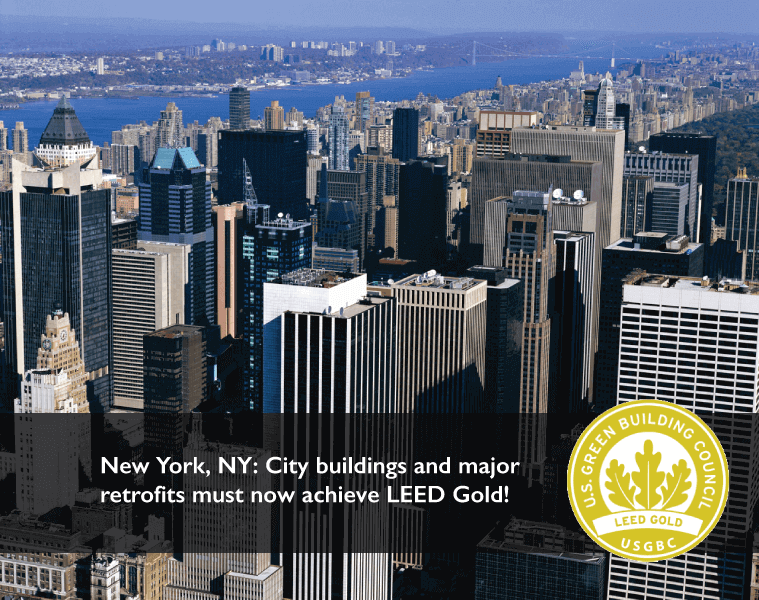 The Urban Green team noted that LL84, NYC’s energy benchmarking law, was crucial in providing energy data that led to the passage of these two laws. It was with this data that the NYC City Council set requirements for energy use on new city buildings and major retrofits; the new measure will require that energy use going forward be 50% less than existing levels. This is pretty significant! Impressive still, this decision is the first data-driven energy target in the country – a new type of metric that experts think will be necessary for us to achieve 80% carbon reductions by 2050.

Several cities across the country have mandated energy benchmarking, so it’s exciting to see how NYC has used this information to set forward-thinking goals. It’s certainly not enough to just monitor and measure energy use – the next step is to plan for reductions! We think this NYC LEED requirement is a great step.

It’s clear from this legislation that NYC legislators are committed to a new generation of hyper-efficient buildings. This decision will likely have worldwide implications, given the international reach of many NYC firms. Also, while not listed in 2015, New York rejoined the rankings of USGBC’s top 10 states for LEED Certification in 2016.

LEED Employment Outlook: Will LEED Get Me a Job?

The age-old question, if I pursue LEED Accreditation, will that increase my changes of getting a job?

Who Should Become a Green Rater

You should pursue the LEED Green Rater designation if you are interested in taking your LEED knowledge to the next level and making an important impact on residential projects. The Leadership in Energy and Environmental Design (LEED) standards are famously used on commercial building structures. However, the LEED green building standards can also be used …