HERS Ratings Are Expected to Grow Due to IECC Code Requirements

The HERS Rating System has been catching on.

The Residential Energy Services Network (RESNET) announced its collaboration with the International Code Council last week in an effort to help home builders transition to the new 2015 International Energy Conservation Code (IECC). In the upcoming version of the residential building code, RESNET’s HERS ratings will be an optional compliance path — some people are saying that this compliance path represents the most significant change coming to 2015 IECC.

What is the International Energy Conservation Code?

The IECC, which is updated every three years, serves as the national model energy code and becomes mandatory when adopted by a state or local jurisdiction. When a builder builds a home, he/she has to meet the current energy code for the jurisdiction in which the home is located.

Building codes often offer two paths to compliance: prescriptive and performance. The prescriptive path requires the builder to follow the code 100% by the book. The performance path allows the builder more flexibility as long as he/she can prove the “projected annual energy usage” of the home is equal to or less than a home built to code. Many builders are already using HERS ratings as a way to meet current codes. RESNET has 17 national home builder partners and close to 300 regional/state partners.

As we get closer to 2015, RESNET and ICC have agreed to several strategies for making the new code come to fruition. Those strategies include:

What’s also interesting about 2015 IECC is that it explicitly states what the HERS score will need to be in each climate zone of the United States. You’ll notice that the scores are all in the 50s. The HERS Index itself ranges from 0 to 100, and like golf, the lower the score, the better. The HERS Index was, in some part, based on the 2004/2006 IECC. At that time, a rated home with a score of 100 would have just met the code. This improved slightly with the 2009 IECC; homes using that code probably have HERS ratings in the 80s. We’ll see a really nice improvement with 2015 IECC’s requirements in the 50s. 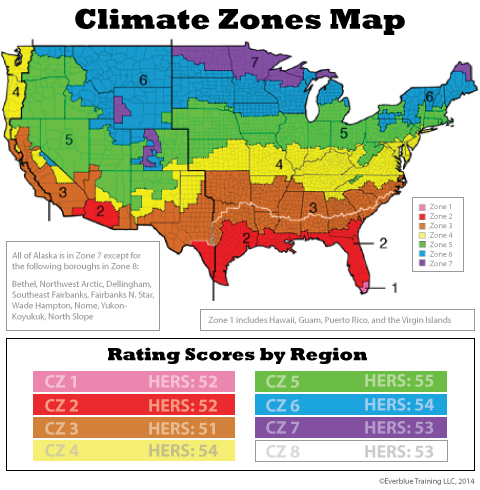 If a builder chooses to follow the Energy Rating Index compliance path, he/she will need a certified RESNET HERS Rater to perform the home rating. It will be interesting to see how many states adopt the 2015 IECC building code. As of January 2014, only six U.S. states had adopted the 2012 code. Most states (27) are still operating under the 2009 IECC. Given the added flexibility for builders who choose the HERS Index path, we foresee an increase in HERS ratings in 2015 and beyond.

HERS Rater candidates now only have to take three certification exams, instead of four!
Read more...

With the certainty of lower utility costs and increased comfort, homebuyers and tenants are often choosing energy efficient environments, regardless of the higher price tag.
Read more...
Blog Blog Back to Blog