What are Green Roofs, and why are they beneficial?

Green building efforts have substantially increased within the past decade as building owners and community planners desire to reduce energy costs and offset the environmental impacts of construction practices. One of the most significant components of the green building process involves the installation of green roofs.

In general, roofs play a vital role in a building’s energy use, especially as it relates to slope. Whereas highly-sloped roofs are able to reflect solar heat more efficiently, lower-sloped roofs, or flat roofs, present a significant challenge for increasing solar reflectance to optimize energy performance. According to the Leadership in Energy and Environmental Design (LEED) standard, one of the strategies to optimize energy for roofs, specifically those that are flat, involves the addition of greenery.

Although green roofs are a relatively new facet in the modern green building process, its prominence as a building technique has long been documented. In fact, for most of the 20th century, green roofs were considered a vernacular building practice, unfit for modern construction projects. However, as urban sprawl increased in conjunction with declining urban green spaces, green roofs began gaining popularity, initially in Switzerland and Germany. However, it was not until recently that they took an increased role in worldwide green building practices, and especially in the case of the U.S., they gained popularity largely in part of the LEED standard. 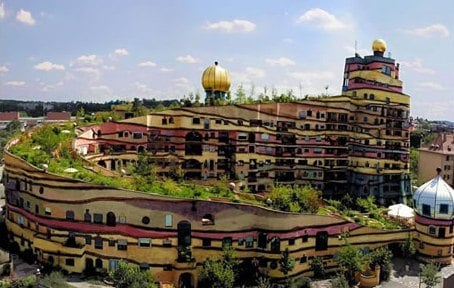 What are Green Roofs and why are they beneficial?

When we talk about green roofs, it’s more than just a difference in color from the traditional black or white roofs; it is a fully-fledged commitment to providing natural or adaptive vegetation to a building’s roofing structure. In large urban areas, where vegetation is scarce (think New York City), green roofs provide the essential elements for buildings to alleviate some of the environmental impacts of urbanization.

Some of the most significant benefits of green roofs include:

Especially in urban areas, where the gradient differences between undeveloped and developed land are more pronounced (given the lack of undeveloped land), temperature increases via the heat island effect, create significant energy demands for building owners. Given the demand for cooling loads to ensure occupant comfort during warmer months of the year, the use of green roofs can reduce the amount of sunlight that is absorbed by the roofing material. Instead, the vegetation acts as a natural cooling mechanism for the building to reduce the building’s energy demand.

With the lack of undeveloped land in highly-urbanized areas, there is the significant issue that many buildings face in terms of curbing the amount of stormwater runoff from their site. Stormwater runoff can have a significant impact on natural environments as well as sewage conveyance, given the presence of pollutants and suspended solids in the water. The native or adaptive vegetation on a building’s roof can significantly improve rainwater quantity and quality, while also decreasing landscaping demands and building cooling loads.

Green roofs also provide extensive environmental air quality benefits through the ability to absorb not only greenhouse gases such as carbon dioxide, but also pollutants and dust.

Finally, a green roof can provide extra protection for the building’s roofing structure, from mechanical damage to ultraviolet radiation. These kinds of roofs are much more preferable than conventional roofing structures as they are less likely to be replaced frequently.

What Types of Green Roofs are Available?

In general, there are two different types of green roofs widely used today: Extensive and Intensive. The differences between these two types largely relates to factors such as thickness, weight, cost, and maintenance.

On the other hand, intensive green roofing structures consist of more than six inches of soil and have greater weight and maintenance requirements than extensive green roofs. In addition, the roofing surface must also be able to withstand a wider variety of plant materials, which can add considerable weight to the structure.

While the use of either an extensive or intensive green roof is dependent upon structural capacities and cost/maintenance requirements, green roofs are important components of the green building process for several building owners and community planners.

The Future of Green Roofs

Green building practices continue to expand worldwide as more environmentally-conscious construction techniques increase in popularity. In the United States alone, the number of LEED projects continues to increase, and with it, green roofs. However, it should be noted that the use of green roofs is not applicable to all regions, as its implementation is entirely contingent upon local codes, climate, and affordability. Nevertheless, the inclusion of green roofs on urban building rooftops serves as a symbol of green building practices to restore greenery and reduce energy costs.

With new and existing buildings following green building standards, such as the ones found under LEED, the prevalence of green roofs will continue to rise as its upfront costs and installation are offset by the numerous advantages of maintaining one.

For more information on LEED and how to become a green building professional, please visit Everblue’s LEED training page, email us at [email protected], or call us at (800) 460-2575.

LEED for Lighting Designers: Why You Should Get Accredited

How to Become a LEED Inspector…Is That a Real Job?

We often get inquiries from people asking how they can become a LEED certified inspector. Sadly, though, that job title doesn’t officially exist.
Read more...
Blog Blog Back to Blog