Green New Deal Plan for the Future: What's Next?

After much discussion and debate, we're left wondering, what's next for the Green New Deal legislation?

The new Congress has convened, which means the Democratic Party has taken control of the House of Representatives. Included in this group is Alexandria Ocasio-Cortez, who is largely being linked to climate change activism and the Green New Deal. Many are now wondering what’s next with the Green New Deal plan as a result of this shift in power.

In the last few weeks, Ocasio-Cortez has suggested that Democrats not squander their opportunity to address climate change now that they can, arguably, do something about it.

Specifically, she has proposed these small actions to get started:

In reality, here’s where we are with the Green New Deal:

Instead, the select committee will be instructed “to investigate, study, make findings, and develop recommendations on policies, strategies, and innovations to achieve substantial and permanent reductions in pollution and other activities that contribute to the climate crisis which will honor our responsibility to be good stewards of the planet for future generations.”

Many believe this new select committee will actually have less authority than its counterpart from 10 years ago – a committee back then that had subpoena power.

“It’s everything we feared,” said Varshini Prakash, co-founder of the Sunrise Movement. “Democratic leaders had an opportunity to embrace young people’s energy and back the Green New Deal, but they failed us once again. This committee is toothless and weaker than the first Climate Select Committee from a decade ago, and it does not get us meaningfully closer to solving the climate crisis or fixing our broken economy.” 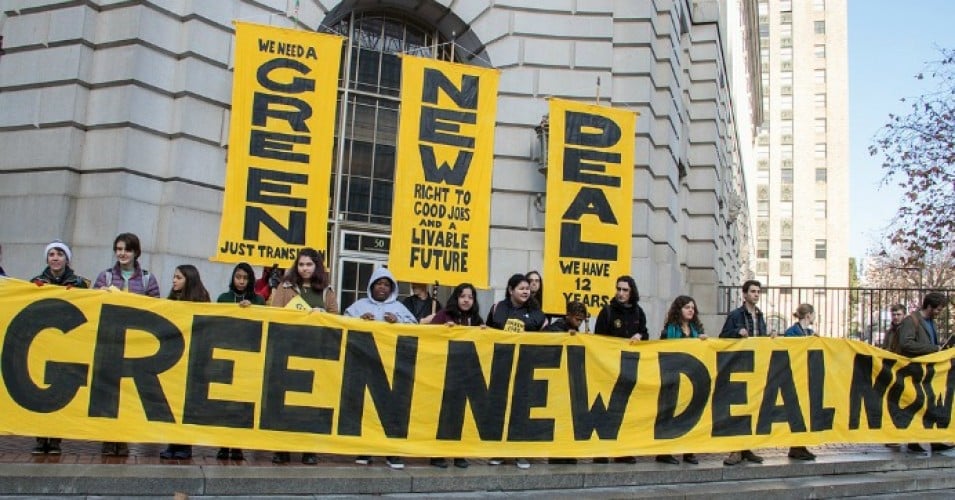 According to Rep. Kathy Castor, the committee will be “in the spirit of the Green New Deal.” It’s hard to say what that will actually mean, but it’s definitely not what the Sunrise Movement and other Green New Deal plan supporters had in mind.

“This committee, if it turns out that the rumors about it are true, sounds about as useful as a screen door on a submarine,” Corbin Trent, a spokesman for Ocasio-Cortez, told The Hill last week. “As it’s portrayed, it’s going to be completely incapable of solving the greatest threat to human kind.”

The climate committee will have 15 members: nine Democrats and six Republicans.

Though things haven’t started as aggressively as Ocasio-Cortez and the Sunrise Movement had hoped, there’s still time for the select committee to make some serious moves toward addressing climate change.

The last thing we need is more speculation, talking in circles, and/or preaching to the choir. We’re reaching the point – if we haven’t already – where someone is going to have to do something.

Everblue Training and ClickSafety are working together to bring you OSHA10 and OSHA30 Training!
Read more...

Garbage To Green in 5 Steps

There are countless ways in which one can live a more sustainable lifestyle, and one of the simplest methods is available right in your own backyard.
Read more...
Blog Blog Back to Blog