Energy Independence Aligns With the American Way of Life

An international perspective on the concept of Energy Independence

Happy Independence Day! July 4th is always a great time of year (Side note: I can’t believe it is already July 4th – Where did Spring go?). Anyways, I am spending this July 4th in Germany with my wife’s family. I spent five years with the US Army living in Germany. Being here for the 4th of July provides a very interesting perspective. First, it is hot and there is no air conditioning – anywhere. Second, every sidewalk has a bike path on it and people bike everywhere. Third, the refrigerators are still tiny by American standards. Fourth, there are solar panels and wind turbines everywhere. Fifth, the beer and baked goods are still excellent. In short, it’s making me think a lot about America’s energy independence issue.

The first and fourth perspectives deal with the fact that Germany is much less energy intensive than the United States. It’s absolutely amazing what Germany has done from both a national security perspective and a quality of life perspective. Germany has almost no natural energy resources and relies entirely on Russia to get through its cold winters. Well, the periodic Russian threats to turn off the gas and the Germans’ historical distrust of the Russians had led to an almost religious pursuit of energy independence. Literally, one of every three roofs here has solar thermal hot water and heating on it. These panels have all been installed in the last five years. I really wonder what these solar installations have done to Germany’s gas imports from Russia. 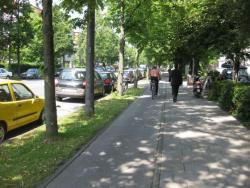 On the environmental/quality of life front, Germans use much less energy in their daily lives. If we in the United States want to think about energy independence, it is going to mean a radical change in our way of life – we won’t get there by just changing out a few incandescent light bulbs! I mean, seriously, no air conditioning – that’s big. While it is not realistic to live in Charlotte, NC without air conditioning we could probably raise the thermostat a few more degrees. Also, imagine if Charlotte actually built bike lanes next to the sidewalk. I’m not talking the short spurts of suicide bike lanes integrated into four lane roadways, I’m talking about an independent space between the sidewalk and the street. I bike to work now and most people that I tell this to in the US usually ask if I have a death wish. I think that speaks volumes about the state of alternative transportation in America. (I actually ride to work on a dedicated greenway, so I don’t compete with cars). In the US, we associate freedom with the car! What is more American than the car and our ability to drive an hour each way to work, to drive to every meal; to drive everywhere we ever wanted to go?

Well, are we really free or have we made a deal with the devil? We drive the car at our own peril. We drive our cars and run our air conditioners at the unsustainable cost of trillions of dollars and thousands of American lives in the Middle East! Are we really free or just living in some delusion? While I love the United States, I am very concerned that we as a society are not serious about making enough of the big changes to our lifestyles to really impact our dependence on foreign oil. Happy Fourth of July! Enjoy the holiday, think about what temperature your thermostat is set at, and where you will be driving on Saudi oil today.

Energy Circle Works For You by Providing Marketing Guidance

EC Pro sets up the basic essentials for marketing one’s business so that it is one less thing for a new business owner to have to worry about.
Read more...
Blog Blog Back to Blog