An analysis on green building in California, specifically the dynamic of CALGreen vs. LEED Certification

Hippies. Trendsetters. The Rich and Famous. These are just a few words and phrases that come to mind when folks think about California. But California green building should also be up there.

California adopted its eco-friendly persona in the mid-2000s, when green building was really starting to take off. The state became the first in the nation to enact a statewide mandatory green building code that covered nearly all residential and nonresidential construction. This was also around the time that LEED Certification started to grow and gain credibility, and many wondered how the two green building standards would work together; would they compete, or would they complement one another?

It helps that CALGreen set the stage for builders and contractors to begin thinking about green building strategies. Whether construction teams pursued LEED or not, they were at least incorporating sustainability into their buildings.

But over the years, the U.S. Green Building Council (USGBC), who created LEED, has worked diligently to share the spotlight in California and, in July 2017, announced that new commercial buildings built to the robust CALGreen code would be pre-approved for significant streamlining of fundamental LEED Building Design and Construction requirements.

CALGreen offers a proven set of high-performance environmental strategies and mandates their use as standard practice on all permitted construction in California.

The purpose of CALGreen is to improve public health, safety, and general welfare through enhanced design and construction of buildings using concepts that reduce negative impacts and promote those principles that have a positive environmental impact and encourage sustainable construction practices.

CALGreen was adopted to address five divisions of building construction:

CALGreen applies to the planning, design, operation, construction, use, and occupancy of every newly-constructed building or structure on a statewide basis unless otherwise indicated. Additions and alterations to existing buildings that increase the building’s conditioned area, interior volume, or size are also covered by the scope of CALGreen.

The Leadership in Energy and Environmental Design (LEED) standards also promote a proven set of high-performance strategies, but LEED Certification of buildings is voluntary more often than not. An exception to this is federal and government-owned buildings, which are generally required to achieve some level of LEED Certification.

LEED shares much of the same purpose as CALGreen but addresses a few more divisions of building construction. All LEED-certified projects must satisfactorily represent strategies from these categories:

Like CALGreen, LEED-approved strategies can be incorporated into the planning, design, construction, and operation of new and existing buildings.

For more information, visit our What is LEED Certification? page.

CALGreen vs. LEED in California

As you can see, those who were confused or worried about CALGreen and LEED existing in the same space certainly had a reason!

When California legislators updated the CALGreen code in 2010, even more people were up in arms. It became clear that CALGreen wasn’t going anywhere and that people needed to wrap their heads around it one way or another.

Since CALGreen is a mandatory statewide code, it’s a no-brainer that that’s where building professionals would start. The question then became, would they challenge themselves to achieve the voluntary, yet marketable, LEED Certification label?

If everyone is building to CALGreen standards, what can you do to stand out? Enter LEED.

LEED Certification: How California Stacks Up

In the USGBC’s most recent Top 10 States for LEED Green Building report, California ranked fifth in LEED Certification per-capita by gross square footage. This report summarized the number of buildings (in total) that acquired LEED Certification in 2016. California was also listed on the 2015 and 2014 lists, both times in the seventh place.

You can see from USGBC’s State Market Brief that LEED project registration and LEED Certification have been dramatically on the rise for the last 10 years. It appears that the introduction of the CALGreen code in 2007/2008 had no negative effect on LEED green building in the state. On the contrary, it seems that with the construction mindset already focused on implementing green building, many went above and beyond to pursue LEED in addition to the code requirements. 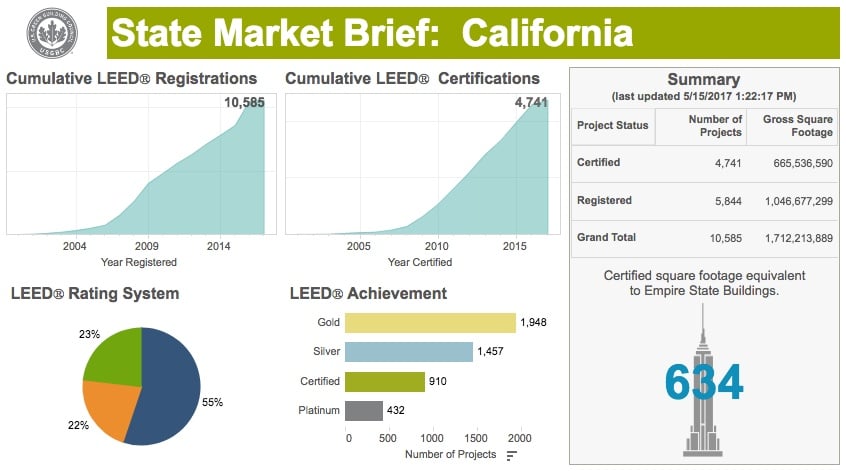 Click image to view a larger version in a new tab

It’s no wonder that the USGBC has streamlined its LEED project documentation to align with existing CALGreen code requirements.

After a report on barriers and opportunities for green codes in California was released in 2015, USGBC launched an effort to build off the statewide CALGreen code by streamlining the documentation of a handful of credits for projects in California.

At the GreenerBuilder Conference on July 13, USGBC President and CEO Mahesh Ramanujam announced the new alignment of CALGreen and LEED in certain areas. Qualifying commercial projects will be able to use code compliance documentation to satisfy LEED v4 BD+C prerequisites and earn 6 points toward LEED Certification.

The full list of streamlined measures are as follows:

An additional 50 points are within reach via LEED credits that exceed code minimums but are complementary to state requirements.

USGBC hopes to significantly streamline documentation requirements for California projects. This new approach will simultaneously reward projects throughout California for meeting the stringent statewide standards and provide a more direct entry point for LEED certification (and an incentive for more projects to exceed code minimums voluntarily).

The Future of California Green Building

The State Market Brief graphic above was last updated in May 2017, so it’s likely that numbers have increased since then.

The Brief also shared that there are close to 30,000 LEED-accredited professionals in California. In our recent blog, we shared 2017 insight from USGBC that, across the country, an average of 1,000 professionals are earning LEED credentials every month. Both in terms of LEED certification (buildings) and LEED accreditation (people), LEED is growing at a tremendous and unprecedented rate.

According to USGBC’s 2015 Green Building Economic Impact Study, green construction will account for more than 3.3 million U.S. jobs—more than one-third of the entire U.S. construction sector—and generate $190.3 billion in labor earnings by 2018. The industry’s direct contribution to U.S. gross domestic product (GDP) is also expected to reach $303.5 billion from 2015–2018.

If you’re ready to take your career to the next level, join an upcoming training course to become a LEED Green Associate professional. For more information about the LEED credentialing process, give us a call at (800) 460-2575.

What is the USGBC? A Study of Green Building Councils

In the green building industry, there are many acronyms that you need to know. USGBC might be the most important one.
Read more...

Learn when and where to take your LEED Exam