The Original New York City and the Environmental Implications

It’s crazy to think about New York’s environmental history: Did you know that the city of Hoboken was originally an island separated from the NJ mainland? Did you know that the first European settlers in the NY area had trouble landing their ships in Manhattan because there were too many whales in the Hudson River? 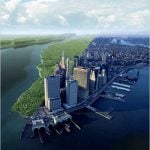 That’s not really mentioned in this article, but it’s cool to think of what a city like New York might have looked like 400 years ago. To give a quick background, Henry Hudson (the inventor of the steamboat) first sailed up the Hudson River in 1609. A couple of decades later, Dutch settlers began colonizing the areas that are now Jersey City and Manhattan.

Nowadays, the entire New York metro area is one big block of concrete (which happens to be why Stormwater Control is one of LEED’s Regional Priority credits for the area), but once upon a time, it was a lush paradise with hills, streams, and wildlife (lots of it). From one day to the next, it’s very easy to forget the impact that mankind has on nature, but after taking the long view of a few centuries, it’s equally impossible for it to go unnoticed. All you have to do is take a few moments to think about and research it.

Even though the Earth has been around for a few billion years, it’s been about 100 years since any species (i.e. man) halfheartedly began considering its impact on others… if for no other reason than for our own preservation. It’s important that we reflect on the environmental history of New York, and all cities, to find ways that we can be better. Here’s to hoping 400 years from now people don’t look back and think that we royally screwed something up.

LEED for HVACR Technicians: Why You Should Get Accredited

Heating and air conditioning certainly plays a role in the LEED Certification process, so HVAC/R technicians should understand LEED principles.